London’s Docklands were once our gateway to the world. Originally built between the 1850s and 1920s the Royal Docks fuelled our international trade and brought wealth to the country. But as ships grew bigger, much of this ocean-going trade moved to larger docks further East along the Thames, and air travel developed to the West at Heathrow.

Whilst much of the transport infrastructure might have moved, what has been left is a stunning legacy of industrial architecture, as well as huge opportunities for the architects of today.

The Royal Docks is once again undergoing a rapid period of change with a wide range of new building in the design, planning and construction phases.

For the next season of our Buildings Sounds audio guide we’re bringing you five episodes on some of the most historically significant buildings in the Royal Docks including
Millennium Mills, the Royal Victoria Dock Pumping Station, The Thames Barrier and the KGV flood gate, The Patera Building on Albert Island, and the Royal Docks Impounding Station

These episodes will be realised over the coming weeks. You can find out more about these buildings by visiting lfa.london/powerpodcasts

Whilst you’re in the Royal Docks, you might like to know that for last year’s LFA we ran a competition – called Pews and Perches – for emerging architects and designers to create a series of unique benches around the dock. For many of these emerging architects and designers this was their first proper commission – their six benches superbly demonstrate the imagination and creativity of our next generation of architects. And that architects can work at any scale.

Many of these benches are still in place. You can find out where they are and hear from the architects themselves by visiting
lfa.london/pews

And finally, to find out more about our collaboration with the Royal Docks team and their work visit londonfestivalofarchitecture.org.

We hope you enjoy this series of podcast from the Royal Docks. 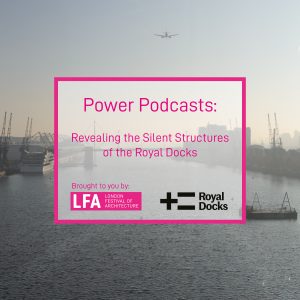