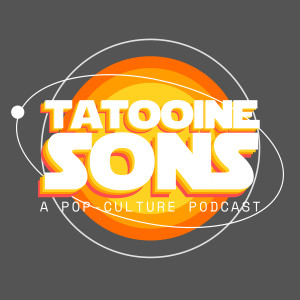 #2 ON SCREEN RANT'S LIST OF "10 BEST STAR WARS PODCASTS FOR FANS, RANKED!" TOP 100 ON APPLE PODCASTS "ENTERTAINMENT NEWS" CHARTS IN US, UK, CANADA, AUSTRALIA AND MORE!
"Although it doesn't focus on Star Wars exclusively, discussion about the Star Wars universe still makes up a large portion of the content in this podcast. Despite dipping their toes into the MCU, DC, etc. the Star Wars content in no way takes a backseat and is just as in-depth and detailed as any Star Wars exclusive content out there...This is a great podcast for those who are interested in Star Wars but still like to have a break to talk about their other favorite movie franchises as well." - Matthew Flores, ScreeRant.com
Tatooine Sons is a positive, family-friendly podcast hosted by David Jesse and his two teenage sons, Sam (20) and Nathan (16). We believe that pop-culture is the mythology of this generation. There is a story written on our souls. These myths speak to that story.
Star Wars | MCU | DC | Comicbooks | LOTR | Cobra Kai
Tatooine Sons was launched in December 2017 at "Tatooine Sons: A Star Wars Podcast." In December of 2018, Nathan asked Rian Johnson, the writer/director of "The Last Jedi": "What is the name of the porg on the Millennium Falcon?"
Rian Johnson responded: "What do YOU think his name is?" When Nathan answered, "Maybe Terbus?" no one really believed the character would become official. But after a year and a half #MakeTerbusCanon campaign on social media, the character was officially named in the all-ages comic book series "Star Wars Adventures," issues 27-29. (https://starwars.fandom.com/wiki/Terbus)
Tatooine Sons is hosted by David (the dad) , Samuel and Nathan. We love how pop-culture helps us see that there is something bigger in the world. We discuss Star Wars, the MCU, DC, comicbooks, the Lord of the Rings, Narnia, Cobra Kai and pretty much anything else pop-culture related through the lens of modern mythology and the "greater story" we believe this mythology points toward.